QUINOA, The Andean crop in demand as a superfood. 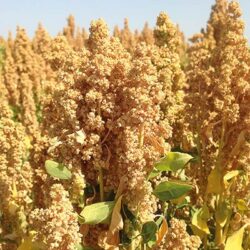 How much do we know about quinoa?
Quinoa is a pseudocereal belonging to the family Amaranthaceae whose scientific name is Chenopodium quinoa, although in ancient times it was known as ‘kinuwa’ by the Quechuas and ‘jupha’ by the Aymaras. It originally comes from the area round Lake Titicaca, between Peru and Bolivia. Cultivated by Pre-Hispanic civilizations, it was the basic foodstuff of the population, although it was later replaced by cereals after the arrival of the Spanish in the Andes area. Peru, Bolivia, where quinoa has been protected by a designation of origin since 2014, and Chile are the main producers of this crop in South America and its consumption has become of vital importance again in its original countries.

What makes quinoa special?
It is not by chance that it was declared ‘Crop of the Year’ by the FAO in 2013 and that NASA chose it as a recommended food for astronauts on interplanetary voyages. The principal factor making this plant so special is that it has a very complete composition,

This website uses cookies to improve your experience while you navigate through the website. Out of these, the cookies that are categorized as necessary are stored on your browser as they are essential for the working of basic functionalities of the website. We also use third-party cookies that help us analyze and understand how you use this website. These cookies will be stored in your browser only with your consent. You also have the option to opt-out of these cookies. But opting out of some of these cookies may affect your browsing experience.
Necessary Always Enabled
Necessary cookies are absolutely essential for the website to function properly. This category only includes cookies that ensures basic functionalities and security features of the website. These cookies do not store any personal information.
Non-necessary
Any cookies that may not be particularly necessary for the website to function and is used specifically to collect user personal data via analytics, ads, other embedded contents are termed as non-necessary cookies. It is mandatory to procure user consent prior to running these cookies on your website.
SAVE & ACCEPT